Reading through the Parent-Teachers guide of the McGuffey Reader  couple of nights ago, the following jumped off the page:

“The phonics controversy does not need to be an either/or argument;  you need not align yourself “for” or “against” phonics.”

That thought, “it does not need to be an either/or argument; you need not align yourself “for” or “against…” has broad implications for our day.

The discourse in the public square has turned into a bar-room brawl.

Have you ever experienced one first hand? (bar room brawl)

Is there a place in the public square for me to say that, or will I be shoved to the side by the thugs from both extremes?

I absolutely believe there is a place for vaccinations.  (Measles, mumps and small pox comes to mind.)

Here’s a little chart I  pulled off the Internet: 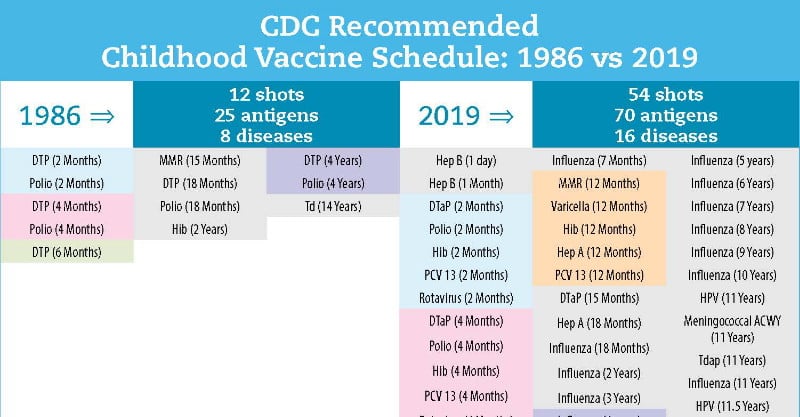 Today, your child will be given quadruple that number of shots.

During that same time period,  there has been an exponential increase  of autism in children.  You probably already knew that.

Could there be a connection?

The medical profession as a whole says, “It’s a mystery.”

What changed during that time?…humm….

I think you can absolutely make a case for parents who are leery of pumping there precious child full of vaccines.

Instead of deriding all  parents who have questions about vaccines as “anti science,” I believe it is still we the parents, the mom and dad, not some federal government bureaucrat  that has the final say….but for how long?

Someone recently asked… Do I plan to get vaccinated?

No I will not voluntarily chose to get the vaccinations that have been “safely fast tracked.”

That’s my choice. Not imposing that on anyone else, or think less of anyone else who chooses otherwise. These are hard, personal, intimate, potentially life and death choices.  We have to start giving each other the freedom to make these decisions without mockery.

I am not anti medicine.  I love my local Doctors, absolutely love them, my urologist, my local hospital.   My sister is an RN.  She and I talk about all things medical, all the time. I am not anti medicine.  Having said that, the only medicine I am currently on is coffee. Just coffee.  My job is physical, I sleep like a baby, have never, ever had a vaccination for the flue before the flue season.  Made that choice, years before COVID-19 was in the news.  Do you think I’m going to change my mind now, just because the CDC says it’s safe?   What do you think….

For years, there has been a similar debate in the public square about the link between Roundup and various cancers.  Round up and honey bee loss.  Round up and…..

Monsanto (the corporation that owned Roundup) did all it could to discredit any nay-sayers.

My neighbor Paul/ the one who used to plow out our driveway after a snow, died five years ago, in his mid 50’s from a rare blood  cancer.  As a farmer, even with the proper protection, he exposed himself to a butt load of toxic chemicals.  I heard later, the Doctors  suspected, that maybe there was a link to pesticide exposure and his rare cancer.

Thugs have taken over the public square.

I shake my head.

I really, really would love to interact with some of you on a host of topics, without snark or sarcasm, but probably not in an on line comment thread.  I don’t do on line debates in comment threads. There is so much that I don’t know. Maybe via e-mail, or in person….

This post could just as well be about sexuality…

Stewardship of the earth, of which climate change is one piece,

I have decided I can no long sit on the sidelines and stay completely silent.

Honestly I do not know how much longer we who live in the middle will have the freedom to speak our minds.

I’ve been wanting to write something simple  on the topics of woke, revisionist history, tearing down statues,  how our country is being overrun  by a bunch of ______________, (fill in the blank.)

Came across this picture yesterday:

I did not take physics in high school.  Doesn’t mean I don’t have a working knowledge of gravity.  😉

I sensed for a while now,  another  law of physics (metaphorically) at work in my life, and only this morning was I able to identify it.

Newton’s 3rd law : For every action, there is an equal and opposite reaction.

Ever since I first read about the Laura Ingals Wilder debacle  by the library association, I’ve felt it.  An energy  bouncing around in my head trying to find expression.

And as my country continues head long on a  mindless rush to throw itself over the cliff,  I find myself moving in the opposite direction.

I saw a clip of a newsman  go on a rant, supposedly while on the air, about the Laura Ingals Wilder award.  He said what I was thinking, laced with a lot profanities.   As I tried to re- track that clip down, it turned out he’s a comedian from the UK, so it was a spoof.  I was tempted to include it here. Most of you are savoy enough with the computer, if you’re curious, you could find it.

Is there a place for profanity?  I think on rare occasion there is.  I can give you at least 3 examples from the Bible, two where God himself uses a type of profanity to emphasize his anger.  First time I came across it, I thought, what the heck?! Didn’t know that was in there!  so yea, there is a place for anger, and I think several of the things that are making me angry, should.

Profanity as Wikipedia defines it:  Socially offensive language, crude…. It can show a debasement of someone or something, or be considered as an expression of strong feeling towards something